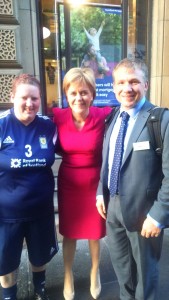 Last night I attended a reception in Glasgow for the Scotland Men and Women’s Homeless World Cup teams.  I was invited along as Move On has agreed to be the shirt sponsor for one of the members of the women’s team – Charlene – who has been a service user and volunteer with us for several years.  Charlene was really keen to talk about how much she had got out of being involved with us over the years and how delighted she was to have Move On as her shirt sponsor.  While I was there, I also bumped into Dougie Graham, one of our ex-peer ed volunteers who has been picked for the men’s team.  Dougie spoke really positively about his time at Move On and how it had been instrumental in his move away from homelessness and addiction.  I also met another member of the women’s team who has been training as a Venture Trust peer mentor and working closely with Shug and Linda who are delivering the training.

It was great to hear so many positive comments about Move On and the impact of our work.  The Homeless World Cup is in Amsterdam this year and starts tomorrow, when Scotland’s women play Norway and the men’s team play the current champions Chile.

I am sure you will join me in wishing them all the best.  Keep up to date with how the Scottish team are doing at https://www.homelessworldcup.org/