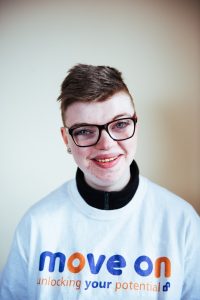 I have been a part of Move On’s Glasgow mentoring service for 14 months now and I have enjoyed the time so far.

I would recommend this service to young people in Glasgow who have experienced being in care.

Move On is celebrating their 20th birthday and for this some Move On volunteers, staff and mentees took part in a little walk around the city centre and took some pictures at famous landmarks like the City Chambers.

During my time at Move On I have recognised that my confidence has been boosted and I have met new people, I have also became more independent. I enjoy having time to talk to someone and get out for a couple of hours.

© Simon Lees Mobile 07900278953 email simon@justsimon.com Copyright Designs & Patents Act 1988, moral asserted credit required. No part of the photo to be stored, reproduced, manipulated or transmitted to third parties by any means without prior permission